One word summary for the book- “Mutt”.

Do you remember hearing the old American Indian story about two wolves fighting each other inside us? The Elder explained to the younger that it was the wolf that we feed, that survives.  (I was surprised that the older story wasn’t mentioned in this book.) That’s the premise of Gordon’s book.  Sadly, I have to say, this is the first book I wouldn’t recommend to anyone. Some of Gordon’s other books have been inspiring, but not this one. (It truly made me wonder if it was ghost written by a kid.)

This story is about two talking dogs, waiting to get out of the pound, that dig up a book about positivity, and then read to each other.  ?   I believe there were two or three other author’s material mentioned, but not even that could spice this thing up. There was very little new information or ideas in this book, in my opinion.

If Old Mother Hubbard went to this cupboard to get her poor dog a bone, I’m afraid the old dog might still be hungry. I was when I finished the book.  No meat.

The saving grace for this book, besides it only taking about two hours to read, is that it would be a great read for a kid. A few pages or chapters a day, and you’ll steer your kid in the right direction.

I do have to say, there were three very small Scooby snacks for me:

Buy it for a kid, but only for yourself if you’ve never read more than one or two books on positivity.  Let me save you $17 (really – $17 ?) – Both dogs get adopted, and then meet each other again as neighbors down the road.

IF ONLY a mother dog had died in the first few pages, they could have made a really weak Disney movie out of it. 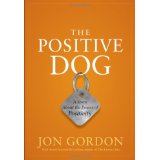 4 thoughts on “The Positive Dog, by Jon Gordon”